They Cheer For Lebron; They Fear Tamir

According to Nike and Lebron James, the city is “all in.”

It’s an emotional commercial showing people from various backgrounds uniting with the city of Cleveland and King James to believe that together they can all participate in bringing a NBA championship to the state Lebron calls home.

But Nike is good with getting people to purchase their products while simultaneously making you forget about the obvious contradictions.

Contradictions that many urban cities are facing.  The fact that people of all colors, shapes, sizes, and bank accounts can rally behind black bodies in NBA-apparel in professional sports arenas but those same people will watch a video of 12-year old Tamir Rice getting gunned down in 2.0 seconds by a Cleveland police officer and respond differently: “he shouldn’t have been playing with a toy gun…where are his parents…those thugs need to pull their pants up and learn some respect…” 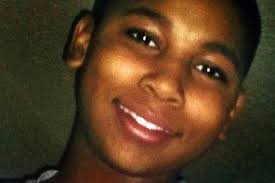 While Tamir, is vilified. This 12-year old boy that they thought was a man caused officers so much fear, that rather than taking their time, making sure they were at a safe distance, and taking the proper cover, they take Tamir’s life.

And when Lebron was a 12-year old man-child he was already making coaches and agents, salivate for the opportunity to brand him as their property.

He signs a $98 million dollar contract with Nike before he is even chosen by the league. He becomes Man of the Year.  He has achieved the American dream.  He is President Obama’s post-racial America.

His tattoos, his high-school education, his single-parent upbringing in an impoverished community do not make him a statistic.  They make him a King.

They made Tamir a target.

But King James is making his 5th straight Eastern Conference Finals appearance and has a chance to sweep the Atlanta Hawks in Cleveland in front of his home crowd, his family, his city.  The mood is electric.

While protesters yell from outside in the streets that “Black Lives Matter”, Lebron will do his pre-game ritual of putting his “Hands Up” as he prepares to shoot…

Both representing the same city.

1 Comments on “They Cheer For Lebron; They Fear Tamir”

From Africa's wealth, empires and ancestry, to America's shores, slavery and oppression, Black History is a culmination of joy, pain, joy, pain, and hope. Black history is a never-ending story that can never be fully told or explained. It is both Africa and America's story. It is both World and US History. It is my family and it is yours. 🙏🏾
Booker T. Washington, Marcus Garvey, Malcolm X. They represent different eras and different philosophies but they are all connected through their relationships directly and indirectly with one another. Booker T. Washington's Tuskegee Institute,  now present day Tuskegee University,  was an image of success for Marcus Garvey who planned to meet with Booker T. Washington so he could start a school like Tuskegee in Jamaica. By the time Garvey arrived to the United States,  Washington had died a few months earlier. Garvey, who is known for starting the UNIA, Universal Negro Improvement Association, and raising funds to send Black people back to Africa, an attempt that was sabotaged by infiltration of spies and government agencies. However, the UNIA's principles spread throughout Jamaica and the United States and a Baptist preacher in Omaha Nebraska, Earl Little, was a chapter president. Earl Little's son, Malcolm Little better known as Malcolm X, was inspired both by his father and Garvey's teaching. Booker T Washington born, 1856, Marcus Garvey born, 1887, Malcolm X, born 1925 demonstrate the interconnectedness of Black history. Each era inspires and motivates another era. 🙏🏾
Ava Duvernay made the Central Park 5 world-famous through her Netflix Documentary, "When They See Us." However, 12 years prior to the wrongful convictions of the Black teenagers in New York, 9 young Black men and one White woman were wrongfully imprisoned for over 10 years in North Carolina. The group known as the "Wilmington Ten" were meeting in a church in 1971 under the leadership of 23-year old Rev. Ben Chavis who had worked under Dr. Martin Luther King Jr. They were planning a boycott of the new school integration policy that Wilmington's School Board had instituted. The new policy shut down the highly successful and well-supported Black high school, Williston Industrial High School, laying off the Black principal, administrative staff,  coaches and teachers. The KKK also got involved as well holding marches and cross burnings to protest school integration in Wilmington NC. Rev. Chavis was brought in to help students and organizers plan a peaceful boycott of the school closing and unjust treatment that Black students were experiencing at their new schools. During the planning of the boycott a fire broke out at a grocery story and firefighters alleged that they were shot at by someone on the roof of the church where Rev. Chavis and 9 other organizers were meeting. The Wilmington 10 were charged and found guilty based on two very susepct witnesses, one who changed his story so much that he was removed from the witness stand. Each of the Wilmington 10 received 29-34 years for arson. The White female, Anne Shepherd, received 15 years for being an accomplice to a crime. Shepherd was the oldest at 35. The youngest person convicted was 18. Each of the Wilmington 10 served at least 10 years of their sentence before they were freed in 1980 after the case was retried and several key witnesses recanted their testimony. In December 2012, Governor Beverly Perdue pardoned the Wilmington 10. Each person was also awarded $50,000 a year for each year served in prison. Four of the Wilmington 10 had already died by 2012. Their families were not eligible for financial compensation. 🙏🏾
Marie Currie, the Nobel Prize winning female scientist is world renowned and rightfully so. However, have you ever heard of the Chemist, Alice Ball who lived around the same time as Marie Curie? Ball invented the most effective treatment for leprosy (Hansen's Disease) in the 20th century at the University of Hawaii where she was a Master's student researcher in Chemistry.  Until Ball's procedure people with leprosy had little chance of survival and were sent to Hawaii to a leprosy colony to die. Alice Ball's research led to a treatment called the "Ball method" and the results were astonishing. Unfortunately, Ball did not live to see the impact of her research as she died at the age of 24 in 1916. A White chemist, Arthur L. Dean, stole Ball's research and treated it as his own even naming the method after himself and packagingand selling the treatment. The success of the drug treatment advanced his career leading him to become the eventual President of the University of Hawaii. It was not until the 1970s that two professors at the University of Hawaii re-discovered Alice Ball's work and helped pushed the University of Hawaii to right its wrongs. Since then, efforts have increased to honor Alice Ball and in 2020 a film was released about Her life entitled "The Ball Method."  🙏🏾
One aspect of Black History that is both painful and promising is the hard truth that much of the history has been intentionally omitted from the Academy, Hollywood, Television, and most damaging of all, public education. Therefore, Black History is full of "new" discoveries that were always there, but hidden in plain sight. And since they've been hidden, a new generation arises having no idea of the legacy and foundation that was established for them.
Happy 5th Birthday Jimmy! You are such a joy and gift to #TeamKoonce. Your warm hugs, sincere questions, infectious laugh, all-around athleticism and twinkling eyes bring so much color to all our lives. 5 has arrived so fast and I am enjoying each and every year! 😍❤😊