The Gift and the Curse of Being the First: The Obamas

Posted on January 9, 2017 by Danielle Koonce 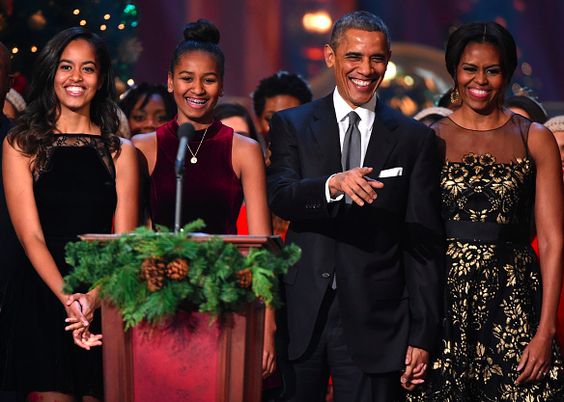 In a few days, the Obamas will no longer be present. Like the presidents that have come before them, they will attempt to slip into obscurity to make room for the president elect.  I am sure we will hear from them, and occasionally we will see them, but the familiar faces that have dotted our television screens for the past eight years will no longer have the platform or the publicity that being the President of the United States afforded them.

It is all coming to an end. The cool, gait of our President casually and slightly skipping down the steps of Air Force One. The poise, charisma, and sista-girl essence that the First Lady carried all over the world.  The continual transition of Sasha and Malia from young girls to beautiful, young women will now be behind closed doors, away from cameras, and beyond the walls of the White House. Mother Robinson, having done her job as the surviving Matriarch of both families is going home as well. Like grandmothers in Black America have been doing for generations upon generations, she’s watched, listened, and carried the heart of her daughter, the hope of her son-in-law, and the growing pains of her granddaughters within her bosom.  And now, it is coming to an end.

We have all been witnesses to an era that many said would never happen: a black family in the White House-not as part of the cleaning staff, not as part of a visiting group of distinguished guests, not as the entertainment at the inaugural ball-but as the President, First Lady, and First Children of the United States.  You have to admit that it is laughable and Divine all at the same time.  Whether people liked it or not, Blackness would be on display in front of our nation and the world for 8, straight years.  The last had truly become the first.

As with most firsts, there are certain challenges that come with the territory.  There is much scrutiny and criticism, but little guidance.  There is much anticipation, but little awareness about what is to come.  There is the dilemma of trying to prepare for something you’ve never experienced.  There is also the pressure of the realization of how many people attempted to do what you have done and failed.  This is the environment that the Obamas as the first Black family found themselves in; and they lived within that environment with poise, integrity, character and grace.

Did they always do the right thing?  Of course not.  Are they above criticism? Never.  Could President Obama have done more politically?  Spoken out more personally?  Certainly.  But, let us not be so quick to lambaste the President without recognizing that he was the first.  Michelle was the first.  Sasha and Malia were the first.  And as the first, they have provided a springboard that will launch the next Black First Family even further.

Let us honor them for being the first. Let us honor them for enduring an America that uncloaked its racism from the very beginning and spread it all over their presidency.  Let us honor them for reminding America who we are and who we have always been. America has always tried to control the image of Blackness that would be disseminated on the air waves and via television. In increments they would air our successes and in excess they would reveal our failings.   But when the Obamas arrived at the White House, America could no longer control the narrative or the image of Black America. They were forced to deal with our Blackness in all its glory, in all its strength, and in all its resilience.

Yet, the first are easy to forget.  Ask Earl Lloyd. In 1950 he broke the color barrier in the NBA. 33 years later, Michael Jordan would enter the league. 20 years later, Lebron would be drafted out of high school.  Regardless of who you debate to be the greatest, they all must pay tribute to Earl Lloyd for opening the door.

Earl Lloyd isn’t the only name that has faded into history. Before Oprah there was Madame C.J. Walker. Before Dr. Mae Jemison, there were the hidden figures of Katherine Johnson, Dorothy Vaughan, and Mary Jackson. Before Halle Berry, there was Hattie McDaniels.  Before Cam Newton there was James Harris.  Before Deray McKesson there was Bayard Rustin. Their Eyes Were Watching God long before The Color Purple.

Every single one of us is indebted to someone who came before us.  Their sweat.  Their labor.  Their blood.  Their failures.  Their successes.  Their journeys.  We stand upon their shoulders. Their break-throughs have carried us and now they have carried us to the White House: The House that slaves built.  The House that secretly sired children from black servants.  The House that ignored lynchings and sanctioned segregation.  The House that pushed the progress of White America and turned a blind eye to the plight of Black America.  The Obamas were the First Family to reside in that House.   Hundreds of years of wrongs, could not possibly be righted within two presidential terms, but the foundation has been laid and it is sturdy, dependable, and most importantly it is irreversible.

← This Ain’t New. We’ve Been Here Before
Why I Love LaVar Ball, and Why You Should Too →

19 Comments on “The Gift and the Curse of Being the First: The Obamas”

This handsome, hardworking and honorable man is celebrating his birthday today. I love this candid shot of him. He's so intense. It's the stance I love and the stance that irritates me. He uses it when he's letting the boys know their consequences if they don't clean their room. He uses it on me when he's explaining why I shouldn't be eating potato chips and drinking Cherry Coke at 9:30 pm (can I live) and why lunges are "allegedly" so good for me. He uses it while he's coaching or explaining a point that he wants to make sure you really get. He's so committed to teaching and helping the people he loves get better and improve.
#TeamKoonce stepped outside for a wedding...This is probably the first time we've been to an outing together since Sarah was born and Covid changed things up. What a beautiful, loving, and joyful experience. 🧡
Reposted from @teamkoonce #TeamKoonce celebrated 11 years on May 29th! We went from becoming one to a team of five! We are so grateful and thankful to God for sustaining our marriage. Whether you've been with is for just a few months or from the very beginning, we thank you for supporting and rocking with #TeamKoonce!
So, Richard and I tried to steal a morning anniversary dance...just to bring in our 11th year of matrimony...RK agreed to record, but one of the kids would not let us be great. Cheers to Year 11. Happy Anniversary to us!
The same way I approach pictures is the same way I approach motherhood...just give it my best shot in the moment. 🧡
Happy Birthday to the Lady in Red, my big sister, @chasitymelvin. Love you so much. Most people know you through basketball. I have the privilege of knowing the pianist who played all her recital pieces perfectly, the bookworm who loved Encyclopedia Brown, the cat lover who adored Garfield, the music lover who played her casettes, Lisa Lisa and Cult Jam and Natalie Cole's "Miss You Like Crazy," over and over again. The honors student who excelled in every class. The homecoming queen, volleball, basketball, track and softball all-around athlete. The world traveller and lover of egg sandwiches. The cooker of one, perfect, pancake because that way you don't have to worry about making mistakes. The sibling who never got a spanking (that's still amazing to me). I'm so glad I know so many facets of you. Cheers to new dimensions. 🥂❤️